What do you do when things take a different turn
than what you expect.  Stay open and flexible! 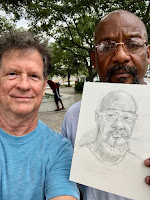 My original plan was once again, to head down to San Marco Square and try another watercolor, reworking the pergola there on a larger piece of cold pressed paper.
I could see the day was a bit partly cloudy and possibly would rain.
I was planning on working up a more refined sketch than my previous piece shown here.


Early this morning I received an Instagram message from the daughter of the man who designed and built the pergola !  She was interested in buying the watercolor of it, and we agreed to meet at the Square around 8am to make the sale.  She photographed me with her son and the piece and after a time she went
on er way.  An old friend stopped by as I began my drawing, and as we chatted

I noticed some soul music coming from a car on the street and a gentleman admiring the artwork in progress.  He said he was looking to get a portrait drawn of himself.  I told him at first I tended to do landscapes, and figured we would leave it at that.  At first I wasn't paying much mind, then I looked at him and decided he had interesting characteristics to draw.  I figured whatever I did I would give it to him. 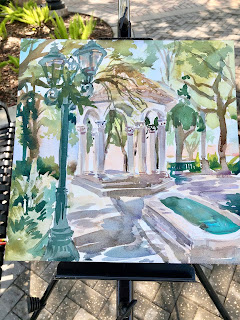 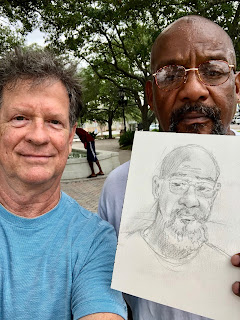 He stood there posing patiently as I drew for about fifteen minutes while standing.  His name was  Frank.  I finished and handed it to him , and he loved it.

The literal meaning of “yoga” is “merging two into one”.

In light of everything going on in the news right now, I saw this small interaction today and the previous visit with my patron as a kind of healing force that came over me, like a still small voice saying "everything will be alright, it will get better".  I needed that much more than simply achieving a watercolor alone.  We each gave one another a gift. 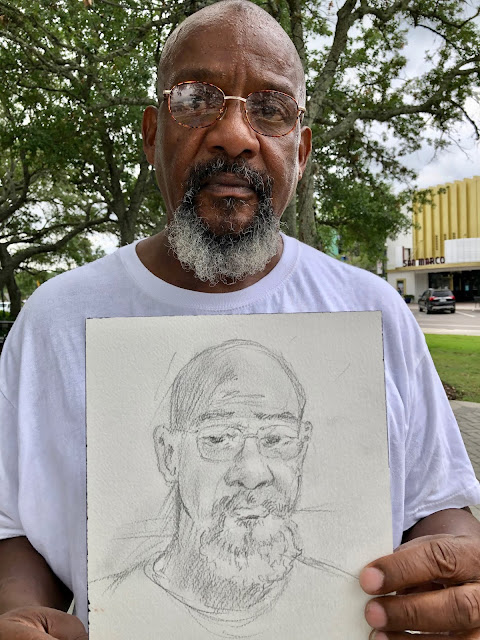 I was going to return to my watercolor,  but since it started
to become more cloudy, I figured I would break the setup
down and take the dogs home and deposit my check.   As
it happened within a half hour it began to rain a bit, so that
turned out to be a good plan and everyone was happy.
Things took a different turn than I expected but by staying open and flexible it worked out even better !

I will simply use the sketch for tomorrows watercolor and
save time then! 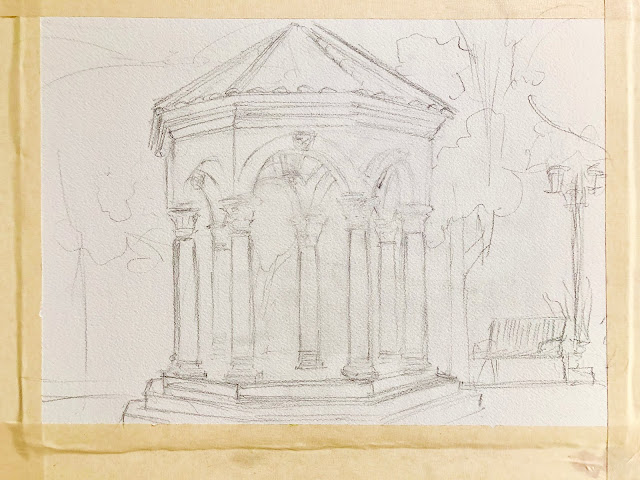 "How To Energize Your Paintings? An Acrylic Workshop at Reddi Arts!

" Why energize your paintings, isn't it enough just to make it look like something? Of course it's not! We live in an energ... 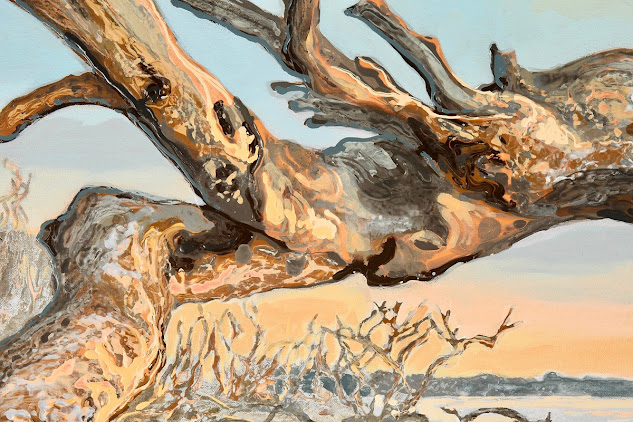